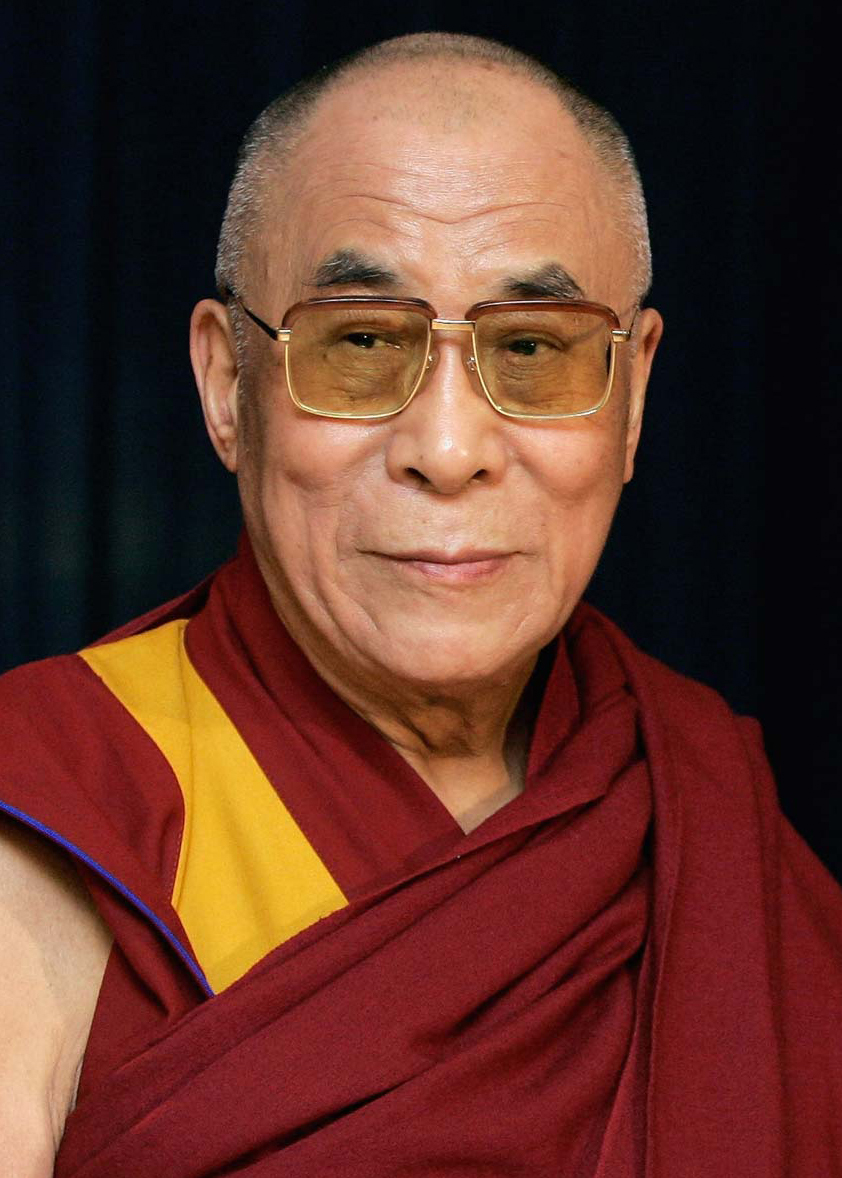 His Holiness the 14th the Dalai Lama Tenzin Gyatso, is the spiritual leader of Tibet. He was born Lhamo Dhondrub on July 6, 1935, in a small village called Taktser in northeastern Tibet. Born to a peasant family, His Holiness was recognized at the age of two, in accordance with Tibetan tradition, as the reincarnation of his predecessor the 13th Dalai Lama, and thus an incarnation Avalokitesvara, the Buddha of Compassion. The Dalai Lamas are the manifestations of the Bodhisattva (Buddha) of Compassion, who chose to reincarnate to serve the people. Lhamo Dhondrub was, as Dalai Lama, renamed Jetsun Jamphel Ngawang Lobsang Yeshe Tenzin Gyatso - Holy Lord, Gentle Glory, Compassionate, Defender of the Faith, Ocean of Wisdom. Tibetans normally refer to His Holiness as Yeshe Norbu, the Wishfulfilling Gem or simply Kundun - The Presence. The enthronement ceremony took place on February 22, 1940 in Lhasa, the capital of Tibet.

He began his education at the age of six and completed the Geshe Lharampa Degree (Doctorate of Buddhist Philosophy) when he was 25 in 1959. At 24, he took the preliminary examinations at each of the three monastic universities: Drepung, Sera and Ganden. The final examination was conducted in the Jokhang, Lhasa during the annual Monlam Festival of Prayer, held in the first month of every year Tibetan calendar.

On November 17, 1950, His Holiness was called upon to assume full political power (head of the State and Government) after the Chinese military invaded Tibet. Between 1954-1956, He travelled to Beijing for peace talks with Mao Tse-tung and visited India to meet with Prime Minister Nehru about deteriorating conditions in Tibet. His efforts to bring about a peaceful solution to Sino-Tibetan conflict were thwarted by Bejing's ruthless policy in Eastern Tibet, which ignited a popular uprising and resistance onMarch 10, 1959. The Tibetan National Uprising in Lhasa, was brutally crushed by the Chinese army and His Holiness escaped to India where he was given political asylum. Since 1960, he has resided in Dharamsala, India, the seat of theTibetan Government-in-exile.

In the early years of exile, His Holiness appealed to theUnited Nations, resulting in resolutions adopted by the General Assembly, calling on China to respect the human rights of Tibetans and their desire for self-determination. With the newly constituted TibetanGovernment-in-exile, Tibetan refugees were rehabilitated in agricultural settlements. Economic development was promoted and the creation of monastic and educational systems were established to preserve Tibetan language, history, religion and culture.

The Norwegian Nobel Committee's decision to award the 1989 Peace Prize to His Holiness the Dalai Lama won worldwide praise and applause, with exception of China. The Committees citation read, "The Committee wants to emphasize the fact that the Dalai Lama in his struggle for the liberation of Tibet consistently has opposed the use of violence. He has instead advocated peaceful solutions based upon tolerance and mutual respect in order to preserve the historical and cultural heritage of his people. On December 10, 1989, His Holiness accepted the prize on the behalf of oppressed everywhere and all those who struggle for freedom and work for world peace and the people of Tibet.

Since his first visit to the west in the early 1973, a number of western universities and institutions have conferred Peace Awards and honorary Doctorate Degrees in recognition of His Holiness' distinguished writings in Buddhist philosophy and for his leadership in the solution of international conflicts, human rights issues and global environmental problems. He has received over 150 awards, honorary doctorates, prizes and has authored or co-authored more than 110 books translated a variety of languages.

Additionally, he has sponsored the Mind Life Institute in which he’s invited modern scientists coming from many scientific disciplines including psychology, neurology and quantum physics.  Collaborative work among both scientists and scholar monks have resulted out of these thought provoking conferences.  Some of which has established programs such as a Buddhist program at Emory University and a science center in Mundgod, India.

His Holiness often says, "I am just a simple Buddhist monk - no more, no less."

His Holiness follows the life of Buddhist monk. Living in a small cottage in Dharamsala, he rises at 4 A.M. to meditate, pursues an ongoing schedule of administrative meetings, private audiences and religious teachings and ceremonies. He concludes each day with further prayer before retiring. In explaining his greatest sources of inspiration, he often cites a favorite verse, found in the writings of the renowned eighth century Buddhist saint Shantideva:

For as long as space endures
And for as long as living beings remain,
Until then may I too abide
To dispel the misery of the world.

Our Most Precious Guru

Gaden Shartse Thubten Dhargye Ling has been blessed with the extraordinary honor of hosting seven  visits to the Los Angeles area by His Holiness the Dalai Lama, including his first visit to the United States in 1979, in which he kindly taught on Kadampa Geshe Langri Thangpa’s “Eight Verses of Mind Training”.

In 1984, HisHoliness  granted commentary on Lama Tsong Khapa's "The Three Principle Aspects of the Path" and bestowed an Avalokiteshvara initiation. In 1989, His Holiness instructed us on Togme Zangpo's "Thirty-seven Practices of a Bodhisattva" and conferred the Kalachakra Initiation. In 1997, he shared a commentary on Nagarjuna's "Precious Garland" and a granted the 1000-Armed Avalokiteshvara initiation  In 2000, he expounded on Atisha's "Lamp for the Path to Enlightenment" and Lama Tsong Khapa's "Line of Experience" together. In 2006, His Holiness elucidated Nagarjuna's "Commentary on the Awakening Mind" and granted the Cittamani Tara Empowerment.  In 2012, he conferred the rare Solitary Yamantaka Empowerment. Public talks were also organized for nearly all the occasions above.

H.H. The 14th Dalai Lama
on going
Peace of Mind in Troubled Times

By: