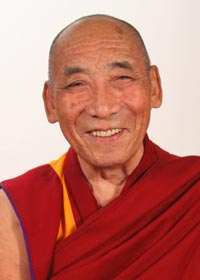 Venerable Geshe Tsultim Gyeltsen was born in 1923 in the Kham province of easter Tibet, Ata. Young age, he was inspired by the religious devotion of his father and his first spiritual teachers and wanted to enter monastic life. He enrolled at the local Chamdo Monastery at the age of eight, studying sutra, tantra, and dialectics. When he was sixteen, Geshe Gyeltsen decided to continue his studies and left for Lhasa, the capital of Tibet, to study for his Geshe degree. He spent the next twenty years immersed in philosophy, logic, ethics, phenomenology, debate, and meditation at Gaden Monastery’s Shartse College and later became a teacher of junior monks.

After the Tibetan uprising of March 10, 1959, Geshela made his way to India across the Himalayas, a member of mass exodus fleeing the oppression of the Chinese Communist occupation. He resettled at Dalhousie in Northern India where he studied for two more years before taking his final Geshe examinations in Dharamsala, where he engaged in rigorous debates under the scrutiny of H.H. the Dalai Lama and his two senior tutors, the late Ling Rinpoche and the late Trijang Rinpoche. He passed with honors and was awarded the highest degree of Lharampa Geshe. Geshela then traveled back to Dalhousie where he pursued higher Tantric studies and graduated from Gyuto Tantric University.

In 1963, Geshela was requested by the Tibetan government-in-exile to travel to Sussex, England to teach Tibetan writing, grammar, culture, and Buddhist philosophy to young orphaned Tibetans at the Pestalozzi International Children’s Village. Geshe Gyeltsen came to the United States in 1976 and briefly taught Tibetan language and meditation at the University of California campuses of Santa Barbara and Los Angeles.  His university students requested that he start a teaching center and in 1978, Geshela founded a center for the study of Buddhism and Tibetan culture in Los Angeles. His Holiness the Dalai Lama bestowed the center its name: “Thubten Dhargye Ling” or “Land of Flourishing Dharma.” It is one of the oldest Tibetan Buddhist centers in the West.

Geshela was the author of the widely-read commentaries,“Compassion: The Key to Great Awakening” and “Mirror of Wisdom,” among other books.  He was known for his great compassion and personal warmth, yet retained a very traditional and uncompromising approach to teaching the dharma. He founded several satellite centers, and traveled periodically to teach throughout the U.S., Mexico, and Europe.  Geshela also belonged to local Buddhist sangha councils, served as a longtime board member of theInternational Campaign for Tibet, and worked to financially support a wide variety of projects benefitting major sectors of Tibetan communities in exile, including monasteries, nunneries, colleges, schools, senior housing, and other humanitarian efforts.

He worked tirelessly to sustain a connection between his center and his home monastery, asking the latter to care for his center after his passing in February 2009.  Many auspicious signs occurred at that time, a testament to the great realizations of a highly accomplished master. The legacy he brought from Tibet transcend time and culture, and his example continues to inspire his students around the world.

In 2013, GSTDL was notified about the discovery our teacher's reincarnation. After a traditional search validated by ancient rites and rituals, His Holiness the Dalai Lama officially recognized a young boy by the name of Tenzin Thardoe as the reincarnation of Geshe Tsultim Gyeltsen. He was born on July 5, 2011 in Camp 2 of the Doeguling Tibetan refugee settlement in Mundgod, south India, not far from Gaden Shartse Monastery. The first "Offering of the Robes" ceremony took place at the monastery, August2013, with a formal monastic admission ceremony that followed in July 2017.  Tulku Tenzin Thardoe attended kinder school through third grade at a private international school in the town of Ooty to develop his fluency in the English language and is set to return to the monastery permanently in 2020. We pray for his good health and great success in his education and monastic training so that he may continue his previous legacy for the benefit of all sentient beings.