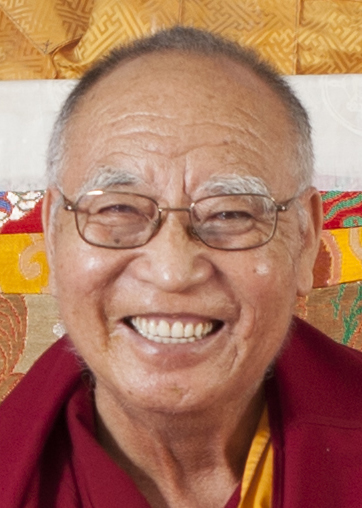 Venerable Geshe Phuntsok Gyaltsen was born in Dekhung, Tibet in 1937. At age 11 he was ordained as a monk in Gaden Shartse Norling Monastery. In 1959, Geshe-la escaped to India after China invaded Tibet. Continuing his studies in the relocated Gaden Shartse Monastery in South India, Geshe Gyaltsen received a Geshe Lharampa degree, the highest degree awarded by the monastery with highest honors in 1985.

Venerable Geshe Phuntsok Gyaltsen was born in Dekhung, Tibetin 1937. Following his older brother into monastic life, he enrolled at Gaden Shartse Monastery near Lhasa, Tibet at the age of 11.

In 1959, Geshela escaped to India after the Chinese invasion of Tibet and joined many other monks and lamas at the transitional refugee center in Buxa, India. Geshela was among the first group of Gaden monks tore-establish Gaden Shartse in 1969 in Mundgod, south India. There, he continued his studies and earned his Lharampa Geshe degree with highest honors in 1986. For 15 years, he served as a debate teacher at the monastery’s elementary school for young monks, among other important posts. In 2001, he became a leading member of the Gaden Shartse U.S. tour group and subsequently traveled to teach in Singapore as the resident teacher of our sister center, Gaden Shartse Dro-Phen Ling Buddhist Center. He is now among the most senior teachers at Gaden Shartse.

Gaden Shartse Thubten Dhargye Ling is now blessed to have him grant authentic teachings from the Lam Rim Chen Mo (The Great Treatise on the Stages of the Path to Enlightenment) by Je Tsong-khapa as well as other great teachings in the Gaden Shartse tradition.